Today I thought I would do a music post alongside my look. It went with purples today and my music list is a bit of a mix as well. I’ve been listening to The Weeknd and Born of Osiris quite a bit, which may seem like an odd mix but the drummer from Born of Osiris (which I had the privilege of meeting at a concert and getting his autograph) posted a video of metalcore cover of The Weeknd’s Heartless. It was truly awesome to see one of my favorite artists cover another one of my other favorite artists, and cross musical genres too. I’m a metal head but I do love other genres of music , especially R&B, Electro, synth pop , and synthpop. Probably more genres and subclasses too but I don’t want to spend too much time going over those , just about the only music I don’t like is country lol.

Also heres the link to Cameron Losch’s cover of Heartless . What was nice is he kept The Weeknd’s voice and just added the metal blast beats 🎶

I went with a ghostly purple look today, all Sugarpill Pink Capsule shadows . I started out with Glory the dusty pink on my brows and my crease. Then used Undone (the plum color) and started blending that in my crease and above, afterwards I decided to blend in Slow Dive( the indigo) on top of Undone. This gave me a nice violet purple look. I cut the crease and added Baby Doll ( the ghostly periwinkle) and even added a bit of Slow dive into my V. I then took another brush and added Supernova into my corner of my eyes . afterwards I smoked out the bottoms of my lashes with Undone,Slowdive and smudged my waterline with a black eyeliner. I still wanted more in my look so I added Hot Tropic ( the shimmery Jelly shadow from the Makeup Revolution Bird of Paradise palette). This added a bit more sparkle, finished up with liner and mascara as well as a bold lip color. I usually don’t do bold lips and eyes but I had a nice intense play list so I went with it. I used Jeffree Star’s Blow Pony and topped that with Too Faced’s Unicorn Tears. 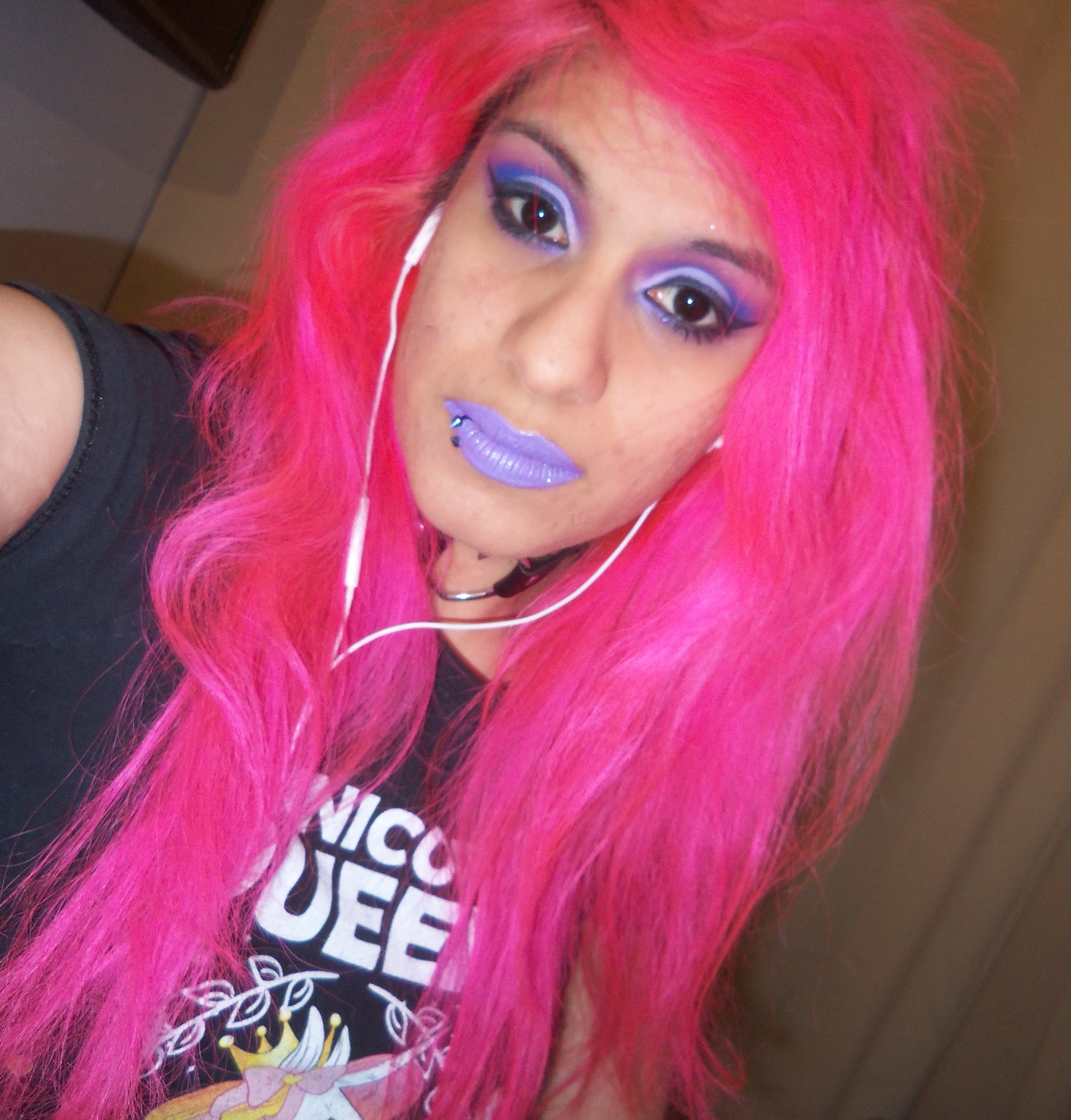 And because I started the week revisiting one of my favorite Deathcore/metal core bands I’ll start with one of my favorite songs from Born Of Osiris. This is off their Discovery album and has a cool mix of Death metal vocals and some electronica and trap beats too. Most of the theme of this album is technology based, some spiritual beliefs and the future. I saw BOO live a few years ago and got to meet the band. They are all really nice people and the drummer shares my love The Weeknd and Gangsta Boo ( of Three 6 Mafia). The song Devastate is pretty powerful and I love the electro trap beat at the end.

And this has got to be my new favorite song of the year. I listen to it a lot, I even asked Cameron Losch of Born Of Osiris when they were going to do a tour with The Weeknd and have a nice metal core version  of Blinding Lights. He responded on IG and said maybe lol So there’s obviously hope ^_^ But that aside I love the Synthwave vibe of this song, and I pretty love The Weeknd’s other songs Heartless and In Your Eyes as well. So basically three Weeknd songs on my playlist.

So hopefully after all this covid stuff I’ll be able to one day hear his music live.

And now stuff that isn’t The Weeknd .

So here’s my other jam, its W O L F C L U B ‘s Summer Lights, a nice peppy song about having fun and living your best days of your life. It might seem ironic for this year but its such a nice 80’s style synthwave song. I love doing makeup and chores listening to this catchy song.

And lets get into some Synthpop too , This song is a really slow song that sounds like it would be perfect for an 80’s thriller. Or maybe some cool cyberpunk scene . I’m not sure which, but I love Electric Youth’s vocals, very dreamy.

And my other favorite Synth artist, Trevor Something . He originally had a backstory about being a time traveler from the 80’s and being sent to our time to create music. I’m not sure if he’s keeping up the stage persona after his face reveal, but his music is very experimental and has been putting out albums and eps every year.  I do love the beat and even the music video for this song. It seems like a great party song or maybe driving song, I might play this while playing GTA V.

While flipping through radio stations I found a rare midnight metal song. it was a relatively new band called Cult of Lilith . This is an icelandic metal band but they use some interesting elements in their song Cosmic Maelstrom. I think its a harpsichord, but it sounds very victorian, like lets have some tea in a garden, but wait there’s also some crazy vocals and and death core elements. Yay ! maybe this well be the most epic metal tea party ever . Also its nice to see more bands use a classical instrument like a harpsichord in their music. Honestly maybe other genre’s should also experiment with this instrument as well, harpsichord remixed into Cardi B’s WAP might be the new thing people need.

I thought I’d end with a classic , which is of course Evelyn Champagne’s Love Come Down. I saw this live a few years ago at an 80’s R&B and Love Jam fest. She was amazing on stage and her voice was the same as this recording.  Honestly I may have seen her a month or two after the Born Of Osiris concert lol . But this is definitely one of my favorite songs to chill to.

Well that’s it for now and probably a good thing I don’t do too many music posts  often. I tend to mix genres and stuff that probably would scare some off . What are some of your guy’s favorite songs to do makeup to ? let me know in the comments:)

I’ve been a fan of bright makeup since I was a teen. Blue and purple lipsticks are by far my favorite so you’ll see quite bit of them reviewed here .Along with the occasional hair dyes too View all posts by oliveunicorn